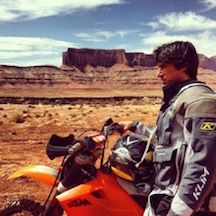 Thomas co-founded Rally Interactive in 2011 with a previous background that included running digital marketing at Canyons resort, overseeing sales, marketing, and reservations at a Deer Valley and Park City-based lodging company, and managing the strategic efforts of the creative agency that launched Utah’s “Life Elevated” tourism rebrand for Utah’s Office of Tourism. Rally Interactive is a digital product development studio that has built Apple Design Award winning apps for National Geographic Society, and lists espn, Google, Nokia, Progressive Insurance, Snowbird Ski & Summer Resort, and the Boston Globe among their clients. Thomas is also the founder of the X-Men, a Park City-based cycling club that is celebrating its 20th anniversary in 2015.

Born and raised in Connecticut, Thomas moved to Park City for the mountains in 1993 and never looked back. When not riding bikes, he and his wife Teresa do their best to keep up with their daughter on the ski hill.