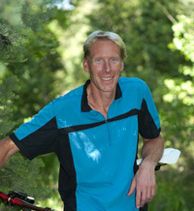 Andy is a native of Columbus, Ohio, but spent his summers in Northern Michigan developing an early appreciation for the outdoors. He graduated from Miami (of Ohio) University in 1991 with a Bachelor of Philosophy and soon left the Midwest for the mountains of Alaska. There he instructed for the National Outdoor Leadership School (NOLS)—leading extended trips into the Alaska wilderness. Eventually, Andy set up a permanent basecamp in Utah, and in 1995, moved to Park City to manage White Pine Touring. At White Pine he met his wife and business partner, Thea, while selling her skis. In 1998, Andy & Thea began acquiring and renovating properties within the Treasure Mountain Inn. A decade later they had successfully transformed TMI into a modern and eco-friendly hotel. Andy is a lifelong environmental advocate and was co-recipient of the 2010 Park City Environmental Hero. Until recently, he also served as President of the Historic Park City (Business) Alliance. When not at work, it’s almost certain Andy’s out skiing, biking, climbing, or exploring the surrounding mountains.